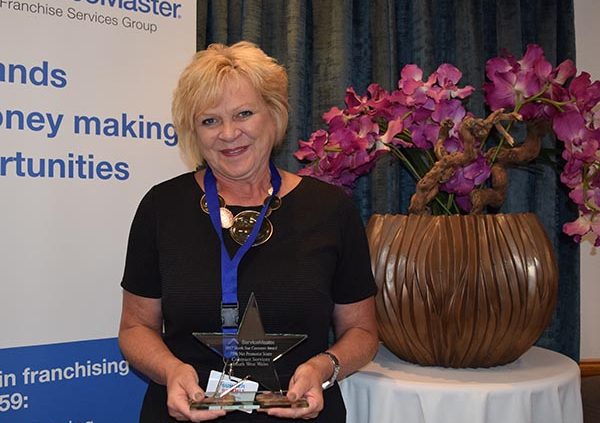 The company, owned by Jayne & Paul Gethin,is a franchise of ServiceMaster Limited and has had a steady growth rate for a number of years now. This is the second year they have taken both the growth and customer service award and believe winning these awards togetherdemonstrates the right mix within the business.

“To pick up these two awards for the second year running demonstrates that customer retention is as important as business growth and they can be achieved together – hand in hand.” Commented Business Development Manager, Jonathan Gethin

“As well as picking up these awards, the last 12 months have seen us move into bigger business units as well as celebrate being awarded our first tender from the Sell2Wales website which was open to applicants throughout the UK.” Finished Jonathan.

Having traded for over 13 years now, the business has high aspirations for the next 12-months and hope to increase their turnover to £1.5 million.

Picking up these awards for one year is a success in itself, but to go and claim them for the second-year running is no easy task.

“It feels great to have won again. Sometimes the cleaning world can be a thankless industry as we are only contacted when there is something wrong, so winning these awards really boosts team morale.

“We can’t wait to see what the next 12 months has in store for us as a business – watch this space!” Finished Jonathan

Managing Director of ServiceMaster, Alan Lewin said: “It was great to see so many of our franchise community and suppliers gathered together to engage in the Summer Summit event. I am always appreciative of the commitment that our franchisees and suppliers make in taking a day out of their business to invest time with peers, colleagues & the franchise support team at ServiceMaster.”

Recognising some of the less obvious, but nonetheless culturally vital parts of franchising is imperative to ServiceMaster and the Summer Summit conference allowed this to happen.

Awards were given for not only growth, but also to those that have given back to their community, or employees of franchisees that have demonstrated their commitment to the brand attributes engaging in initiatives and actions with colleagues and customers well beyond their job description, very often in their own time at their own expense.

A Guildford based commercial cleaning company is celebrating after scooping...
Scroll to top